My second visit to the Valle de los Caídos wasn't through choice; the wife and I were attending an event at the hostelry attached to the Benedictine monastery around the back.

For those of you who don't know, the Valle de los Caídos (The Valley of the Fallen)  is a bizarre monument outside Madrid, that Franco build ostensibly to commemorate the dead on both sides of the Civil War, and where, as the Mayor in Graham Greene's Monsignor Quixote said, "Franco planned to be buried like a Pharoah."     The project was a obsession of Franco's, and it took twenty years, and much slave-labour of political prisoners, to complete.  All this was at a time when the country was devestated and starving at the end of the Civil War, which rather calls into question the Generalísimo's sense of priorities.  As the Mayor in Monsignor Quixote also said: "Russian prisoners labour[ed] at least for the future of their country.  This was for the glory of one Man."

The monument consists of an enormous cross on a mountain top rising 150 m from its base, and a tunnel driven 262 m  into the mountainside.  As the guide book from which I got these statistics says:

"The Guinness Book of Records is really a more suitable repository for these facts than a guidebook to the delights of old Spain.  A visit may be made out of curiosity but aesthetic pleasure is not to be derived."

The monument is certainly grotesque.  With the outside adorned with brutal cuboid columns, and the inside with sinister sword-bearing statues of  angels and hooded figures supposed to be allegories of the Armed forces, it looks like the result of commissioning Albert Speer to design a Hammer Horror film set. The whole is evocative of two horrors: the Ultra-right regimes of the last century and the creepier sort of Spanish Calothicism that was the stuff of the Black Legend.  In fact, the whole is indicitive that any "Black Legend" perception of Spain was justified quite late in 20th Century.

Talking of which, I read on the BBC website a remarkable exercise in obscurantism by one of the monks who is attached the the Benedictine monastary on the other side of the monument, a certain Laurentino Saenz de Buruaga.  He is the chorister and an expert on folk music and Gregorian chant, and I would have thought that as such he would have been blessed with enough aesthetic sense not to praise the monument so much. But anyway his speech(..) was reminiscent of the propoganda made by the Church on behalf of the Nationalist Zone during the Civil War.  To read these myths propogated again so long after Franco's death was bizarre.  I don't know if Brother Laurentino was consciously telling some pious lie, or whether he saw Franco and his regime rose tinted spectacles.  The latter is quite likely given that Franco was said to have been surrounded by expert of propogandists.  (The monk whom I took to be him seemed quite genial when I saw him walking around the hostelry.)

But whether a willing propogandist or the dupe of propoganda, one of the proposterous claims made is:

"... almost from the beginning, any talk and almost any memory of victors and vanquished has been eradicated... The Valley of the Fallen is a place to find common ground, for those who faced each other on the battlefield, in the battle over ideas."

Two points.  Firstly Franco had not been concerned with reconciliation, but continued to humiliate and persecute the defeated Republicans for long after the war was over.

Secondly the monument was largely constructed by the slave labour of republican prisoners.  These prisoners were only to be paid a peseta a day, and even eighty percent of this went on the prisoners' upkeep.  Similarly food destined for the prisoners ended up being sold on the black market.  So the fact its construction was used as another means of the victors humiliating the vanquished, makes the monument an odd symbol for any -- in the event, non-existent -- spirit of reconciliation.

On entering the crypt I was told I wasn't allowed to take any pictures inside.  This irritated me because it was partly with this object in mind I had bought a new camera (and hence a bollocking from my wife for my profligacy.)  I remember I had been allowed to on an earlier visit.  But that had been on the anniversary of Franco's death, and I had been surrounded by Ultra-right parties commemorating the day, and so maybe dispensation had been granted so they could take away momentos of their day out.

That day, I remembered, had been interesting.  I had chosen the date deliberately out of curiosity, and maybe for the frisson of danger at being surrounded by so many Ultraright people.  In the event the attendees had by no means been all skinhead thugs.  There had been some nicely turned out young men, one lady of certain age giving the Roman salute while passionately calling "Franco!", and even some families with little kiddie fascists wrapping themselves in the Spanish flag. (But anyone choosing this place to do a spot of Fascist watching should check first, because I understand using the monument for political rallies is being banned.)

On this my second visit the atmosphere was more solemn.  My wife was bothered that so many people chose this of all churches for prayer.  But maybe even a monument like this can be inducive to peace, particularly in such an out-of-the-way location.  And maybe whatever the real intentions of its builder, for some it genuinely symbolises reconciliation.

Eavesdropping on an English Language guided tour was quite fun.  The lady pointed out the grave of José Antonio Primo de Rivera, describing him as the leader of "a political" party, who had been killed at the start of the war.  I admired the delicacy with which she avoided the word "fascist". 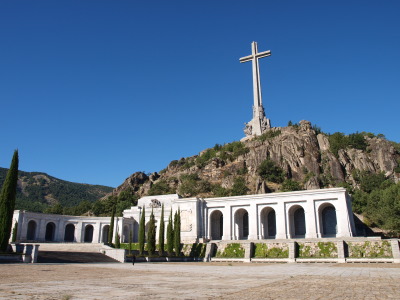 What's to be done with the site?    The current socialist government were talking of turning it into a study centre for the Franco Government.  There would be an argument for dynamiting the thing out of existence.  Certainly its upkeep can't be cheap.  When we visited there was scaffolding covering the entrance.  There were also signs of damp on the cieling.  This is I suppose to be expected if you build a monument in a mountainside.  (Doh!! Hadn't thought of that!)

As an indication of the times and Franco's character it has much historical significance, and is also a fun place to see once out of curiosity and marvel at the horror of it.  So in that sense it would be a loss to destroy it.

But the trouble is with monuments of that size is that they do take up a lot of space.  Franco is now largely regarded as a national embarassment, and all over Spain, statues of Franco have been quietly taken down.  This being so, one might ask, why let one monument which is a particular eyesore on an otherwise beautiful peice of countryside, remain?  As Nicolás Sanchez-Albornoz, a former political prisoner that took part in its construction, said: "before it was profaned, [it was] a beautiful piece of land."  (Ironic, but maybe appropriate in this case, to describe an ostensibly religious building as a profanation.)  He then went on to say that he would only be induced to go back if "the crypt is given a different use and now, given my age, that there is also a urinal on Franco's grave so that I can relieve my prostrate."

Comment posted by Bridget Whyte 4137 days ago
Full of interest. Check spelling and grammar. Use more full stops.
Comment posted by Jon Goldhill 4162 days ago
didn't realise you were such an amusing writer. a suggestion: include the references as hyperlinks in the article